I was chatting with the lovely @Lady_Packinson the other night and she told me that she attended the WFE NYC premiere in April and saw Mr. Robert Pattinson in the flesh! Remember, this was the premiere that Kristen jetted across the country to attend (to support her boyfriend, of course!) I just had to share her experience with all of you! Gosh, I wish I lived in a place where I could just drop by and see ROBERT PATTINSON! Enjoy 🙂

Well this has truly been the best day of my life so far. On April 17, 2011, I had the privilege of being graced by the graceful, warm and tender appearances made by Reese Witherspoon, Robert Thomas Pattinson, Christoph Waltz, Sara Gruen, Mark Povinelli, Hal Holbrook and others including Rob’s immediate family at the Water for Elephants NYC Premiere in Midtown Manhattan at the Ziegfeld Theatre. I did not see Kristen Stewart or Tom Sturridge who we all know by now was in fact at the Premiere but skipped the glamour and flashes of the Red Carpet.

My day began when I first got to the theatre at 8 a.m. I can tell you that over 300 people had already been there some claiming even to have been camping out from 6 the previous evening. At strictly 9 o’clock, the event managers began distributing wristbands to the first 200 persons. Upon conclusion, 250 wristbands had indeed been given out but the rest of fans were not denied. We were awarded WFE promotional posters with a number& signature assigned to it and was dismissed and instructed to return at 3:30pm while the crew needed the area to set-up.

Upon receiving my poster ; I retreated wondering what else I would do with the rest of my day. Then I met 2 young ladies, Jessica & Yvonne, who asked me if I was here alone. I answered with a quick yes and they invited me to stick around with them until it was time to return. We hit Times Square, browsing the Disney Store, Aeropostale, the MAC store and a few others while the time seemlessly dragging on. We went to the M&Ms store and decided that we should do something a lil out of the ordinary. It was there and then, we purchased a 1lb bag of Pretzel M&Ms which we decided to give to Rob. How cute is that?!?!?

After that, we got something to eat and chilled for a little while. While we relaxed passing off some time, we girls decided that it would be cool to write Rob a letter. So we did and we placed it in the bad with the M&Ms hoping that we get a good enough spot to give it to him. After a while or two, we retreated. When we got back to the theatre at about 3:00 p.m. tons of people were already there and the crew began organizing the fans very systematically. When I was allowed into my respective section, I sought out a spot where I thought I could see Rob clearly and I stood behind 2 girls much shorter than myself. We waited and waited for a while, 5 p.m. seeming like forever away. Wristband holders were screaming endlessly but nothing was yet to happen. At 5 p.m. an SUV pulled up alongside my fan section. A door opened and a bodyguard stepped out. Next thing I knew, fans began screaming “Rob….Robert….It’s Robert Pattinson!!!!!” The screams were unbelievable but not the worst I’ve heard.

The guy that met my gaze was personally gorgeous. His elegant ensemble was flawless and neatly executed from the tips of his tousled bronz-ish brown hair to the toes of his well- shone black shoe. His grey Gucci suit was very sharp complimented by a white button up shirt and a very neatly tied burgundy tie with black shoes to finish off his fresh appearance. He didn’t look like his usual tired self but greeted his long waiting fans with all smiles. It amazed me what he did for his fans. I knew he was tired but He really did attempt to hold it together and project the most amazing face and body language he could. If I didn’t know how busy his schedule was, I would’ve thought he had a normal night of sleep the previous night. He was truly fantastic throwing himself into taking pictures with his fans and singing autographs. While doing this, he also said a word or two to his fans. When he got to me, I placed the camera down for a while and hooked out my book and Baby Blue Sharpie Marker for him 2 sign. He took my book, however the marker falling to the ground as he had his own. His reply blew me off my feet. “Oh shit!!!!” I heard him say, his eyebrows seeming to run away from his eyes and his lips twisted into a sweet twinge to the left side of his face. I replied quickly with “That’s ok, Rob!!!!” and looked at me, flashed that beyond gorgeous smile of his and continued his way on. Truly amazing……however, I never got my Sharpie marker back though, whoever has it #Shame_On_U!!!!! lol. I was just running through my pics on fb, and I realized I took a pic of a lady standing there with my marker in her hands for Rob to sign her stuff. If I only knew………… hahaaaaa

Since my friends and I found different spots, when he got to them, they gave him the bag of M&Ms which contained our little note. He thanked us for it knowing that they’re one of his favourites treats while flashing us his most gentle, warm smile. Nothing and I mean nothing could compare to this smile of his. He continued on, spending an incredibly long time corresponding with his fans until it was time for him to hit the Red Carpet. The screams and hollers did not end there though.

I tried my best not to go crazy. It was hard but I held it together for his sake. I mean, I knew that Rob was already very tired from wrapping BD shooting before hopping on a plane to NYC. He probably had jetlag and he definitely tried his utmost best not to disappoint his fans which he executed flawlessly. The last thing I wanted to do was burden him with another EXTRA OVERLY EXCESSIVE CRAZY ASS GAL!!!!! although every part of me wanted to dive on him and hold him in my sweet, loving embrace. He did exceptionally well to mask his tired nature and I respected him enough to mask my obsession for him.

We were all hoping for Reese or Christophe to make their appearance, carefully scanning each car that passed by. We finally caught Reese in a dark tinted SUV as well but because she was already late, she dropped off further down the road closer to where Rob now was. She greeted the fans in that area briefly and scuffled along with Rob to the Red Carpet where they faced millions of flashing lights and instinctive reporters.

Although the fans in my section were not graced by Reese, before she entered the theatre, she rendered us an apologetic wave acknowledging us. She looked quite amazing I might add in her short white dress with black appliqué at the neckline and throughout the white ensemble and a very sweet silver heels. She also was sporting her wedding band which can be seen in Red Carpet pics. Next to Rob, they looked completely amazing, the on-screen chemistry visible enough for a blind man to see.

We stuck around for a while, hoping to catch Rob or Reese again, maybe even Christoph since we hadn’t seen him for the evening. A few of us was also hoping to catch a glimpse of Kristen Stewart who was rumoured to be wearing a red dress. Those rumours were quietly abandoned when videos caught Rob & Kris leaving the theatre. She wore a beautiful J. Mendel light grey/silver short dress and black heels which were quickly ditched for a pair of sneaks They looked rather affectionate as they hurried along into their waiting vehicle…….TOGETHER!!!!! According to some sources, her dress matched Rob’s suit and her burgundy lips matched his tie. #Epic!!!!!!!!!

After the movie was finished, we had a chance to meet Christoph who came over and greeted us, thanking us for coming and adding that he hopes that we will enjoy the movie. While he signed my book, he added “This is more an engraving than an autograph,” with a short snicker afterward. I couldn’t help but snicker back at him while adding a “That’s great Christoph.” He took a few pics and signed a few autographs before blowing a kiss to the fans and being on his way. It was really sweet of him to do so. We did happen to catch a glimpse at Sara Gruen,. There was Donna Scott as well, in a white ensemble almost fit for a formal affair. She too looked very stunning. We also saw Mark Povinelli at the end and Robert’s family, his sisters and mother walking out first, while Mr. Pattinson exited a while after, quickly smiling and waving to the decreasing crowd as he moved along. There was no sign of Reese at the end and Rob & Kris had already been rumoured as left the premises. I did not see Tom Sturridge but it was clear was there with Kristen. Among those seen also was Sara Gruen who wore an elegantly casual white frilly dress which she complimented with a pair of mauve shoes, very classy indeed. Her shoes were super cute and I thought she looked great. She seemed in a hurry to go while climbing into an SUV with her kids. Mr. Hal Holbrook also quickly greeted us before climbing into his awaiting car. Julia Stiles was also at the Premiere!!!!!

All in all, I admit that saying this day was AWESOME may be the understatement of the year. I had loads of fun……..made some new friends in the process and trust me; I wouldn’t trade this experience for #ANYTHING!!!!!!! Finally seeing one of my favorite actors in the world, being mere inches from him, having his autograph signed in my book while he dropped my Sharpie was all too great an experience for me. The only thing that may measure up to this is a personal date with RPattz lol. But it was indeed a pleasure to share the same breathing space with him and I can tell you, what you guys see on that television is #NOTHING compared to what this guy is in real life. He’s kind, warm, gentle, hottttt, cool, genuine……..and the love that radiated off of him today for his fans was AMAZING. I was glad I went, no regrets whatsoever. I spent a mere 13 hours in Manhattan today but what I received from Rob was sooooooo much more worth it. 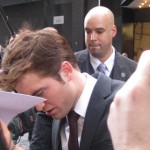 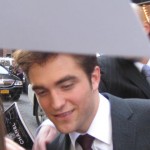 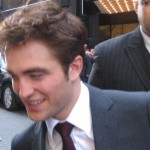 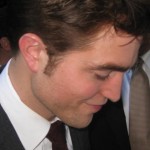 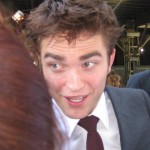 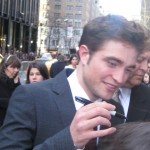 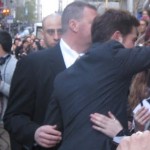 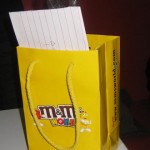 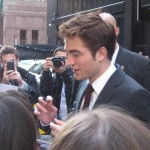 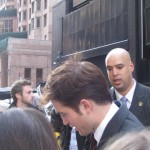 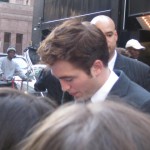 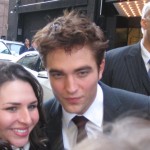 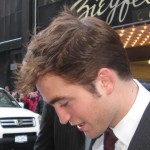 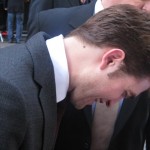 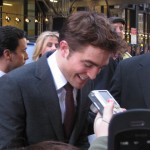 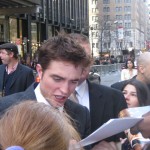 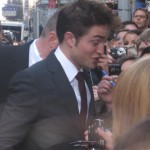 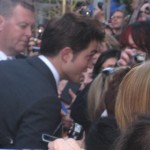 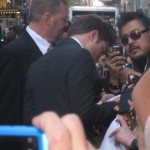 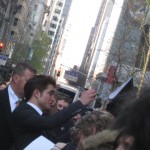 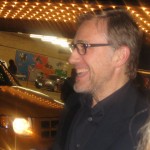 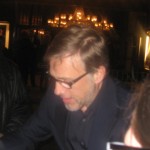 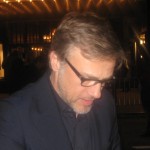 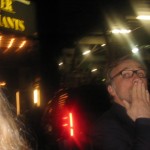