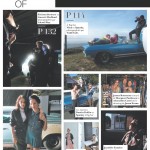 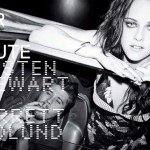 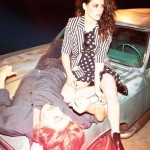 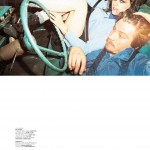 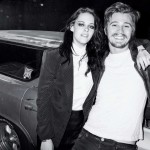 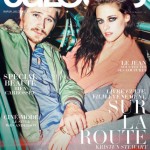 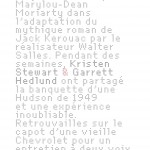 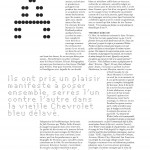 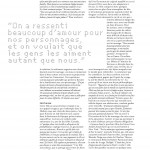 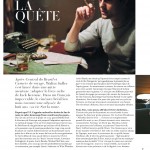 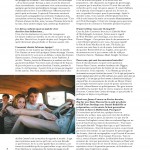 Read Kristen and Garrett’s interviews in the transcript, download the PDF file, and enjoy fashion details from this photoshoot after the cut!

Sur La Route – On the Road

Apparently, there’s still ‘group’ movies where actors, technicians and movie crew share something for weeks and then part different ways, knowing they’ll have to every night when they sing along around a fire.

By being close to Kristen and Garrett for a few hours, you can see this closeness right away: their friendship definitely comes from their filming/adventure. They might be young (21 ad 26), these two have lived and no matter how pretty they are, they’re not dumb. Honestly, we love to criticize but here we’re gonna have to bow. If their filmography might not play in their favor (Twilight for Kristen and Troy for Garrett), they tackled this adaptation with so much intensity and intelligence that you can see it in this interview. The way they listened to their character and how accurately they portrayed them is confirmed to us by the producers and by the biography of the writer who was working as a consultant on the movie.

They’re happy to see each other again, Kristen and Garrett, it’s so obvious. They took joy in posing together, tight one against the other in an old washed out blue Chevrolet, that was used as a prop for the shoot. Lying down, sitting at the wheel, slouching in the truck, spread out on the hood …

They laugh and tease each other during breaks, light up cigarettes. After the shoot: two voices interview. Kristen, in a white t-shirt and mini shorts cut off from on old Levis’ 501, mounts a stool, looking natural despite her darkened eyes for the shoot. The sweet Garrett, who seems really nice, sits on an opposite couch and pops open his first can of Coke of the day. After lots of champagne between takes (the assistant actually showed him how to serve it like a gentleman, which made the actor laugh: ‘It’s like a woman, you have to take the bottle by the neck’).

The Beat goes on

They really wanted to make this movie.

Kristen: I read On the Road when I was 14. It was the first book that made me want to read. Two years later, I received the script and met with Walter. Sometimes you meet people and realize you wanna do the work for the same reasons as them. Whatever the conversation we were having, we shared a common excitement, him and I felt the same energy. When I left, I learned I got the role and I jumped everywhere!’

Garrett: Yes, you bailed on our dinner for that.

Kristen: What? Oh right, I was so young.

LuAnne Anderson, the real Marylou, was young too. Married at 15 to Neal Cassady, the real Dean Moriarty. Garrett was 22 when he learned he was gonna play the best mate and unwary accomplice to Kerouac, whom he said, helped him open his eyes when he was a teenager and that the reading of the book pushed him to leave Minnesota. On the set, he celebrated his 26th birthday. For the 4 years of waiting before the budget was finalized, the will of the actors never deflated. ‘Walter Salles’ persistence was remarkable. He prepared the project while filming a documentary: in fact, he already started the movie before the green light was given, ‘ tells Garrett. ‘With Walter and a crew of 50 people, we took a trip from NY to LA, we had to stop 9 times for car troubles but we did it.’ Chili, Argentina, New Orleans, Arizona, Mexico City, Montreal, San Francisco. The trip taken for the movie, forced the crew to live like gypsies for several months. The three main actors had to through the same during this journey, no comfort or pampers (agents and PR weren’t present either which is pretty rare in the US.)

Garrett: ‘We all leaned on each other. We were like a family for 6 months. It’s a feeling you often get in this work line, except that a month after you find yourself wit a completely different family. But to feel a sense of belonging this strong, doesn’t always happen. On this movie, it was really special.’
Kristen follows: ‘Everyone who worked on this movie told me the same, it’s rare to be part of such an experience. If I wasn’t a part of it I would have been jealous!’
To strenghten this solidarity, the producer organised a beatnik tour before the shoot: a month submerge in the beat generation culture with readings and screenings (all the Cassavetes’ movies!). It was a prior common experience that helped Kristen familiarised herself with her character. ‘I had the opportunity of listening to hours of recording from LuAnne talking about that period of time, listening to her voice brighten when she talked about teh way she danced. We knew so many details about the real people in the book, about their lives, that it helped us play difficult scenes. They were with us.’

This girl with a strong personality and a stunning sex appeal, who got on board in a Husdon of 1949 alongside two friends, it was for Kristen a feminine role pretty rare, whether it is in the literature of the time or in the cinema of today. LuAnne felt in love at 14 with the will-o’-the-wisp Cassady. ‘Something probably awoke in her thanks to him’, explains the actress, while squirming on her stool. ‘Nothing that she did was marked by fear. She was a being that freed herself from the inhibition, she wasn’t someone who’s fearful. Her eyes are wide open when it comes to life, no judgements, she’s able to find the beauty in all of us. I envy her. She constantly bursts out, she wants everyone to feel good all the time.’ A girl with no taboo, who is divided between the two friends.

Garrett comments: ‘She understood that jealousy had no meaning She knew that her man was sleeping left and right and that his personality made him want to touch everyone.’

Kristen!: ‘She didn’t shy away from sleeping with all his friends either’, Kristen goes on. The erotic promiscuity !!!!!!!!!!! in the non censored version of the book (the original manuscript published in 2007) should be in the movie as well. Indeed, the movie features a few hot scenes, in addition to an atmosphere of party and permanent excitement, everything reinforced by drugs and alcohol. On the Road is unrestrained like the life of the trio might have been. The trio that initiated the hippie freedom in the 1970s with one or two decades in advance. For the actors, sex and drugs were part of the contract from the beginning of the shoot but it’s difficult to get details on how they experienced this personally on set. ‘We felt a lot of love for our characters and we wanted people to love them as much as we do.’ they both reminisce. We buy their enthusiasm. Even if the story sets place in the fifties, the movie is timeless with its heroes everyone can identify with, starting with the actors. Both confess being completely won over by the spirit of road tripping, the thirst for freedom, the search for the ‘it’. They even got a philosophical lesson out of it: ‘When you get out of high school, you feel like whatever you wanna do is at the reach of your hand. But once life beats you down a little, you think of a job, you need to be good. Instead of dashing for the conquest of your life, you get slowed down by life and you end up losing your wonder/amazement.’

Kristen, from the top of her status as an actress who’s worked since her teenage years, didn’t want to lose her spark either. ‘I would love to be as excited as those guys were. I would love to be like this everyday. It has nothing to do with age.’ We finish by talking about the ending of the movie shoot, about the heartbreak and the separation. Garrett couldn’t be present for the wrap party because of other obligations (he will be in the next movie by the Cohen brothers, ‘Inside Llewyn Davis’, that will be filmed soon in NY.)

‘You didn’t even sign my copy of On the Road’ Kristen reproaches, who will also line up the roles while playing Snow White, alongside Charlize Theron and then will meet up again with Bella (and Robert Pattinson) for Breaking Dawn Part 2.’It was hard, I felt like I was going back to school, ‘ she confesses.
It’s like the end of the summer vacation.

Other interview details via @alice_intwiland:
@k_moka11: K was wearing a white t-shit and jean cut-offs for the interview
K and Garrett were happy to see each other again, the shoot was in LA
Kris, Garrett and Sam stayed at the same place (hotel) as the rest of the crew
K was very happy to be a part of it, said she would have been jealous of the actors had she not been a part of it
K said she listened to tape in which LuAnne talks about how they lived/danced…
K: After the shoot, going back to filming BD1 felt like going back to school.