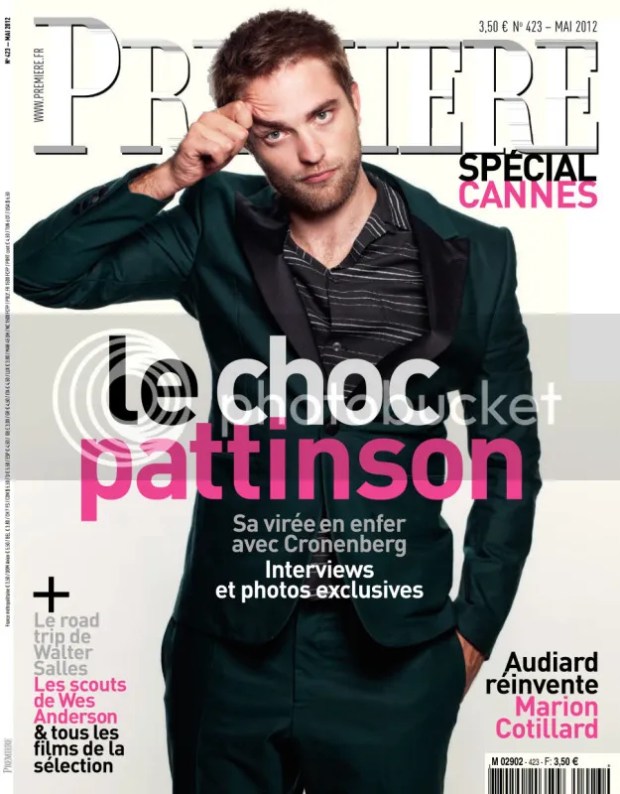 Star of Cosmopolis, the new movie by David Cronenberg, in competition at Cannes, RP was a willing participant to a crazy photoshoot that lasted 13 hours! Find out more in the May issue.

In general, when you organize a photoshoot with an actor, whose movies made more than 2.7 billion of dollars all over the world, you except someone cold and shy, someone with a controlled image and with a safeguard. Everything is timed to the last minute, especially if the actor arrives late, everything has to be started over again. I say ‘in general’ because all of this doesn’t apply to Robert Pattinson!

It’s at the end of our interview that the actor comes up with the idea of a photoshoot dedicated to David Cronenberg’s movies. Like an hommage to his respect for the filmmaker, who by casting him in Cosmopolis, offered him not only a passport for after Twilight but also the opportunity to come and celebrate his entry to the adult age, on the steps of Cannes on May 25th.

To say that he got involved in the making of the photoshoot is an euphemism. The first images of Scanners and Videodrome we prepared for him as an inspiration for the future snapshots came back to us with an unexepected commentary: Rob was sorry that they weren’t more daring, wanting to push all the limits with this shoot – the complete opposite of what someone in his position would have asked. Two days later, the photograph Eliot Lee Hazel and his crew – sort of strange for this kind of shoot (a special effect makeup artist, a pregnant lady …) – met in a glumy hotel in downtown L.A. to give the go-ahead of this shoot that lasted for exactly 13 hours.

After seeing the results of this shoot, we’re ready to bet that you won’t look at Robert Pattinson the same way again. That the last pretense who might still weigh on the actor will fly away as fast as they appeared.

One thought on “Find Out All About Robert Pattinson’s Premiere PhotoShoot That Lasted 13 Hours!”