LuAnne married Neal Cassady at the age of 15 and divorced him soon after but remained his mistress for many years. She was with Dean and Sal as they travelled across the USA, experimenting with dregs, alcohol and other antics, often crude in nature. LuAnne is Marylou in On The Road. “I don’t resemble her at all,” proclaimed the actress Kristen Stewart who, before Twilight, lent her acting talents to the role of a pouting and sensual muse on the road and in the wild in Into The Wild by Sean Penn.

Do you remember what you felt when you first read On The Road?

This book truly ignited something in me when I first read it. I was 15. I loved the manner, the story … I was so taken with the boys! It was really different from any other book I had read. It was my first favorite book. The first thing I highlighted was a description of the way Marylou’s sitting in a room, like a surrealistic painting, disconnected from the boys. Thanks to Walter, we learned so much about these people – much more than what was written in the book: we knew the real story, we read the scroll version …

How did you react when Walter proposed you the role?

I was only 17. I was in my car, I was so excited that I kept switching gears. I just couldn’t believe it, until the day I was on set.

LuAnne/Marylou is described by Keroauc as a “nymph with waist-length dirty blond hair.” How close do you feel from your character?

There’s very little information on LuAnne compared to other members of the Beat Generation. Though she seemed socially friendly, she was very withdrawn from the outside world. Her life was very private. So it was hard for me to find her. Luckily, I had the chance to speak to her daughter.

What struck you the most about her?

Her incredible ability to love, her pure humanity. It;s such an exceptional quality. I didn’t expect it at all. She’s honest, open and understanding. She’s observant, but she doesn’t judge anyone, and she keeps completely unaware of outside judgement. In a time like that – and even now! -, to be able to openly sleep with a man who sleeps with other men and women at the same time … And yet she stays true to the American ideals of the fifties. She travels both worlds so well! At first, I didn’t understand it. LuAnne wasn’t being rebellious, she was just being herself. It wasn’t like “these times are killing me,” she just didn’t fit in them. Surprisingly, she had serious stomach problems when she was younger, but she ignored them. She was okay with her own insecurities; that’s what made her able to take the trip.

During the preparation, you had the chance to listen to LuAnne’s actual voice. What did you learn from those recordings?

Her voice was beautiful and it told us things ans stories we didn’t know. I fell in love with it. She spoke like people did in the forties, with words that we don’t use anymore. She has a much more higher voice than I do. I’m clipped, I swallow everything I say … She’s much more articulate.

Did Walter ask you to watch some movies before the shooting?

Shadows was the main one, especially for the New Year’s Eve party scene. Walter really wanted us to feel some of that spirit. He is a very generous director. As all great artists do, he can become maniacally obsessed, in the best way.

In an interview, you said that Marylou was “the necessary estrogen” between Sal and Dean. What did you mean by that?

She was a bridge between those two very different men. If she hadn’t been around, they probably wouldn’t have been so close. She provided harmony. She had both of them in her, and they both needed her. They had a unique bound that doesn’t fit with what we are used to. Everyone says that women in On The Road were just toys used by the guys. But she was a willing party, she was not a victim. When Neal first met her, he said: “I’ve met me match!”He was truly in love with her – maybe a little too much. She was wild and loud, she was funny, wacky, and sexy. That’s what he loved about her.

How intense was the shooting?

It truly was the most absolutely loaded, richest, craziest, wildest time I ever spent on a set. It didn’t feel like we were doing a movie. We had the chance to spend four weeks in a boot camp before the shooting. It helped us to know each other, to feel comfortable. Though I wasn’t there as long as I wanted to, we were exhausted. We didn’t sleep – ever. I don’t know how we did some of those scens … Sometimes, if you’re really into something, you cannot sleep and be very happy with that. Walter wanted us to stop thinking about our acting. It really felt spontaneous, like On The Road should always feel. Our trip would have been worth doing even if we weren’t filming it. The conversations that we shared, the poems that Garrett wrote …

I truly came out of every take blind. I was so dead. It was very hot in Montreal at the time, and we had 60 extras in the little room we were shooting … I was able to shake my nerves for all the other scenes, but for this one, I was very nervous, because I’m not a dancer. But it was my job to loose my mind. I wanted so badly to get to the point where I couldn’t see. Every single time I thought I was going to fall over, someone caught me. It scared the hell out of me, but at the same time it was the most fun thing I’ve ever done.

Kerouac wrote his novel with jazz in mind. Somehow, did you feel like a musician on the set?

Yes. I played one other part that was based on a true person, in The Runaways, and it was difficult for me to put into words into my character. In On The Road, on the contrary, we were encouraged to improvise, we wouldn’t have been doing the right thing unless we stumbled onto things and lost ourselves. There is always little room for freedom, but in this case we had everything. We could not do wrong. In the boot camp, we worked together for four weeks, gathering all the information, preparing ourselves as much as we possibly could so we could forget it and move on. Sometimes, you’re truer to the book if you don’t repeat the exact line. Every single take was different. We shot so much – that’s Walter’s thing. He’s always moving, capturing everything. The movie jumps and hops, it’s sporadic, like the book. And when it stops moving, it’s so apparent, oh my gosh!

Kerouac’s novel is very liberal in some aspects and pretty conservative in others – it has been criticized for its misogyny. On screen, your character seems stronger than in the book …

The movie would be so different if it was true to the novel! And people wouldn’t be satisfied. It would be such a shame not to tell the whole storyL how many times are we going to adapt this novel? It had to be a mixture between reality and fantasy.

The Hudson is almost a character in itself. How did you fit in it?

It’s a ragged buy! I always feel that my car is a girl. But the Hudson is not a girl! Oh God .. on a road trip, you form a very particular bound to the car you’re in. Interestingly, in real life, Neal didn’t travel very much with this car. And the Hudson is so famous now! It’s funny.

Sam Riley and Garrett Hedlund told us that they were heart-broken when you left the set. Did you feel the same way?

I couldn’t believe they would carry on! Now it’s fine and I know I didn’t belong to the rest of it, but I could have literally stayed in the hotels, just sitting and watching. I wanted to stay over as badly. LuAnne had the same feeling; she had to be done but didn’t want to. She could have stuck around a little bit longer and torture herself but she desired not to.

You played in another road movie, Sean Penn’s Into The Wild. Was it a similar experience?

Compared to all the work that I’ve done, they felt the most similar. These environments lived before we got there and lived in us, truly. Sean and Walter are not afraid of that feeling. In most movies, each one is trying to get his own job right. With Walter and Sean, it was rather like we were all doing something together. In Into The Wild, my character is rooted, unlike Marylou. If she was a little but older, she may have followed him out. She could have turned into a Marylou but she was just too young.

You can go anywhere with him, he’s going to be there for you. He has a magic power. Before you’re about to move, he’s already there. That’s remarkable.

Like Twilight, On The Road is usually read during teenage. How different are these books to your eyes?

You couldn’t think of more opposite novels. It stroke two very different chords in me. In Twilight, we tried to be as faithful as possible to the book. On The Road, freedom was welcome: it was all about having the right heart.

Marylou is not the typical Hollywood character. After Twilight, most roles you chose are rough and risky: The Runaways, Welcome to the Rileys … What drives you towards this type of characters?

People who have bereaves close to their skin have more to say. They are more interesting. It’s only risk to play them if you’re afraid to lose vast mainstream appeal. Most actors think about how they’re going to be perceived: “This is going to get me here, this is going to make me be this type of actor!” I don’t. That’s why I did Twilight as well. I loved it just as much as my other movies. It doesn’t really matter in what capacity it’s shown. What delivers me is “it” – as Kerouac would say. Luckily, me and LuAnne have that in common.

On The Road is now finally ready. What did you feel when you first watched it?

It’s hard to put it into words. It surprised me so often, it’s both really sad and fun to watch. I’m so proud of everyone! Most movies try to answer all of your questions. This one just leaves you asking more. It leads you places, but it doesn’t tell you where to go. Each time you watch it, you go down a different street.

LuAnne Henderson (Marylou in “On The Road”)

Kristen Stewart: “To be honest, at first, I asked myself: “Oh my god, how am I going to play such a bubbly person?” I felt very different from her, especially from her outward self. She was constantly smiling, she shined. As soon as I knew where that smile came from, it became much easier for me. It’s not a vanity thing. She was aware of herself physically but at the same time she was able to throw that out. Whereas most girls who smile are smiling at themselves, she’s truly smiling at you.” 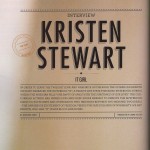 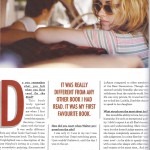 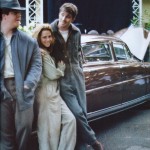 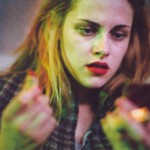 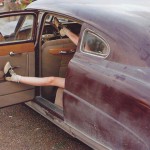 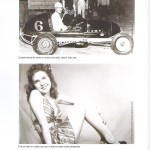