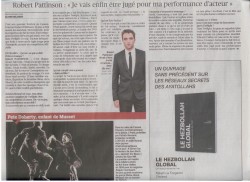 Translation
Le Figaro: How does it feel to be at Cannes?
Rob: It’s crazy. I was at the screening of On the Road the evening before yesterday. It was intense. At every scene, I felt terrified, blown away, captivated. On the Road and Cosmopolis are kind of similar in a way, they talk about a journey. They’re road movies. In a way, they talk about the same thing, freedom, this desperate attempt to look from something different than the sad daily reality.

LF: You and Kristen Stewart, both actors from the Twilight Saga, are in competition at Cannes. Is that a game, a coincidence or a challenge?
Rob: I don’t think of it as a challenge. I admit that it’s really strange. The year when Twilight ends, Kristen and I end up in Cannes … For me, Cannes is the most important competition in the world. When I was a kid, even before I knew I wanted to be an actor, I would rent DVDs with the Palme logo on it to impress my friends. As an actor, you dream that one day all your movies could have that logo on their DVD cases. My secret goal was to one day be invited at the Festival. I thought it could happen in 10 years and it happens now! I think the phone call I got to tell me that Cosmopolis was selected for the official competition, was one of the happiest moments of my life.

LF: What push you to make this movie?
Rob: The script. I read it in half an hour. It was perfect. The only thing that terrified me was that the fear that I could screw everything up. What helped me decide too was the conversation I had with David Cronenberg. I asked him why he chose me and he answered: ‘I don’t know!’. Then, I asked him if he understood anything about the script and he simply told me that he didn’t but that it wasn’t important. I hesitated for a week then I called him back one night, almost in tears: ‘I want to do it, as soon as possible!’

LF: Who’s Eric Paker?
Rob: He’s a guy who did everything to empty himself. A lot of people think he’s nihilist. On the contrary, I think he hangs on to the slightest bit of hope. But every time, he’s disappointed.

LF: How did the filming go?
Rob: David Cronenberg did everthing he could to unsettle me. Eric Packer slipped through my fingers like an eel. David constantly told me: ‘If you understand anything to what we’re doing, it’s over!’ So I played my role like a melody to a song. I didn’t understand the lyrics but I felt like I was in tuned to it. After one week of acclimation, we often filmed scenes in one take. Even the 15 minute scene with Paul Giamatti was done in one take! At the end, this is the movie that gave me the most confidence.

LF: Will Cannes be a launching ramp for you after Twilight?
Rob: People don’t watch Twilight for what the movies are but more as a global phenomenon. Edward Cullen is like a superhero A superhero who doesn’t do anything but be super. In Cosmopolis, I’ll finally be judged for my performance. That’s why I’m scared!