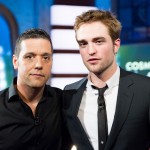 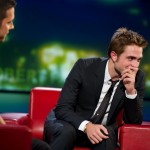 Attending the show was great. I know George socially but I’ve never actually been to a live taping. This was the final show of his 8th season. Yesterday was a special friends & family presentation with the cast of Cosmopolis before they walked the red carpet at the Canadian première.

I should have taken a pen & paper because I forgot I wasn’t allowed to use my phone. NOTE TO SELF.

These actors made me think about myself, my career, my life. It’s really quite magnificent to be in the same room and hear them candidly speak about their lives, insecurities, and work. All photos by JJ Thompson. Thanks to the lovely Erin & CBC for sending right away.

He was watching a clip of himself from a movie with Reese Witherspoon where he played a very small part. Despite making millions, five twilight movies and dating K.Stew (who is on the cover of Vanity Fair July 2012), he’s lacks confidence, security. He was modest and slightly soft spoken.

He said he avoids the media because he doesn’t really know what to say and he isn’t that smart anyways. I imagined him to be more, more strong. He was undoubtly charming and his accent had my eyes light up with hearts like an old Loony Toons character. Tempted to rush the stage, I held back. Safe to saw, I was swooning.

The way Rob sat in his chair vs. David Cronenberg showed a lot about their characters. Cronenberg, a seasoned and incredible film maker, sat back in his chair, open body language, head held high while R.Patts was the opposite.

George asked David Cronenberg if anyone ever tells him “it should be done this way” or “do it like this”, he paused before answering and said “it’s been a long time before anyone told me what to do”.

Double swoon. The confidence he has in his work and artistic ability to create is insanely motivating and attractive, professionally.

Being weird is something I’ve really come to embrace and so has Paul Giamatti. Growing up I always had this artistic ability I couldn’t fight that lead me to be different, blaze trails and have ‘interesting’ fashion sense.

Giamatti is an excellent actor and I was surprised to hear him talk about having anxiety. He defined himself as being a bit weird and enjoys playing random characters that show up in movies playing a poignant role. Before shooting with Cronenberg & Pattinson he had some anxiety but is seems it’s a normal thing for him, any many actors to face when on a big project. You forget that the characters in moves are real people. Well, I do.

You will have a good chuckle hearing Giamatti talk about giving the US president a swift kick in the ass.