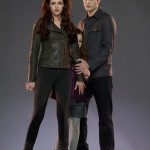 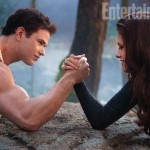 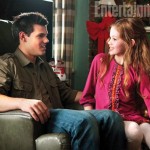 It’s the beginning of the end. When The Twilight Saga: Breaking Dawn Part 2 hits theaters on November 16th, it will mark final installment in the blockbuster franchise. But that’s not to say it won’t pack a bunch of surprises—and several new characters. Chief among them is Renesmee, the half-human, half-vampire baby of Bella (Kristen Stewart) and Edward (Robert Pattinson), who is played by Mackenzie Foy, 11. “It’s a  hugely important part,” says director Bill Condon, who loved watching Foy and her older costars interact. “They were amazing with her,” he says. “It really  brought something paternal out in Rob, and Kristen was especially protective. I’d have to interrupt them when they were in deep  conversation to get going with a scene.” It helped that Stewart began her own acting career as a child, in movies such as The Safety of Objects and Panic Room. “I loved chatting  with Mackenzie,” she says. “I’m always curious about what’s  going on in the minds of kids on set. She’s really close to the age I was when I started.”

But Pattinson points out that having an impressionable youth on the set curbed certain cast members’ predilection for raucousness. “We’re all around the same age and we’re really not polite to each other anymore,” he says. “You’d have to tone it down when Mackenzie was around.” Or at least  attempt to. “She had a little swear jar, and I think she made 850 bucks or something.”

And having an actress like Foy, who (rather spookily) resembles both Stewart and Pattinson, didn’t hurt either. “Even our hands look similar,” Stewart says. “It  was kind of strange. But it’s funny how it actually helps. It’s like, ‘Oh, hey, you look like me, kid! Come on!’”