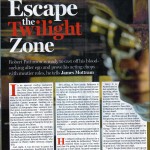 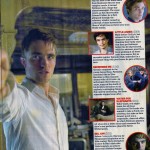 Quotes from his Interview:

Sucking on a pink lollipop, the Twilight star signs a handful of autographs then saunters over. He’s quiet, unassuming…

About the Cosmo premiere: “I was so nervous watching it…I couldn’t concentrate. Afterwards, I was a the party freaking out!”

“Sometimes you need to trick people. That’s all it is. It’s just a trick”

“After Little Ashes, I was done… I got Twilight afterwards, completely by fluke. I had no money, and I had to pay a tax bill.”

On Cosmopolis- “It really changed my confidence afterwards. I have signed up to a bunch of other stuff now which is quite ambitious & weird”

‘While Cosmopolis is very much an “all or nothing” movie, it probably helps that he’s with (Kristen) Stewart now. Even before Twilight, with films like Into The Wild, the 22 year old actress was something of a risk-taker.

“It’s nice to have someone who is really ambitious and has good taste“, Pattinson nods. “I’ve always liked my friends and people around me to be quite good pace-makers.”
“You don’t want to have a bunch of arse-kissers around. You want it to be a competition.”