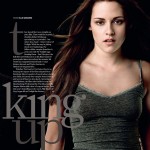 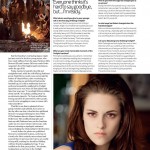 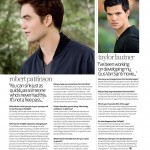 Rob and Kristen were both asked about their life after Twilight, what they hope to accomplish next, and they talk about each other’s career ambition:

In what ways has Robert changed since the franchise began?
Kristen Stewart: Rob is ridiculously ambitious. I see this drive and it’s only starting…especially right now because this is all coming to an end. I guess it’s not a change, it’s just something that’s come out and developed.

Kristen describes you as being ‘ridiculously ambitious’. Is that true?
RP: I think I want to be…The difference between me and Kristen is that she can do a day of work and at the end of the day be like,’I did the absolute best I could. Satisfied.’ Whereas I don’t think I’ve ever had that day in my life. I always go home irritated and want to fix it the next day. I don’t know who has the bigger ego in that case. Whether hers is bigger because she thinks what she did is fine, or whether mine’s bigger because I think I’m so great it’s never going to be good enough.

To read the rest of Rob’s interview, view RPLife’s website below.

Via RPLife / Transcript via Those British Boys