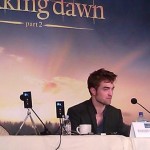 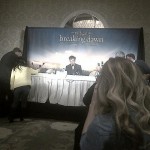 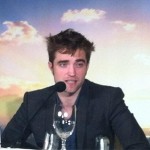 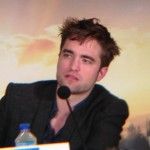 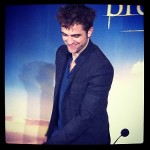 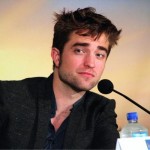 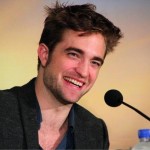 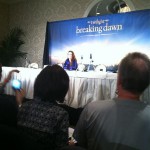 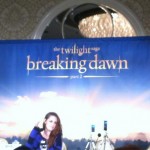 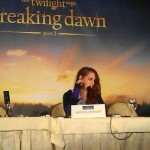 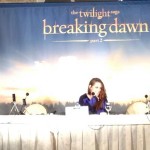 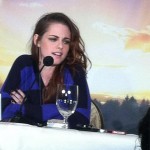 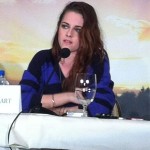 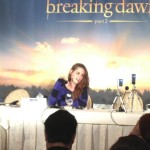 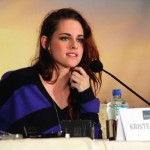 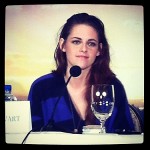 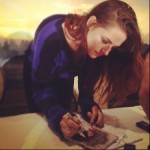 Press Conference Transcripts thanks to Hypable!

It’s funny, people are asking me how I’d feel when it all ends when we were promo-ing the first movie. I’ve never felt more bewildered, knowing we only have a month let of Twilight stuff to do. i’ve said since the second one it’s going to take ten years to settle into my brain. I don’t think anyone knows why they connect with it the way they do. I don’t even know if Stephenie knows why she was so fixated on this very very contained story.

Q: If you could go back in time five years, what kind of advice would you give yourself then to prepare what would happen in the next five years?

Start drinking vodka instead of beer. And try to get a six pack (abs) as early as possible, and you’ll be a much more successful actor. It’s kind of fun to deal with the terror and the huge highs and lows of things. I’ve never known – I’m still getting massive surprises any time we have a Twilight related event. When we went to Munich for the third movie, the entire olympic stadium was packed with 30k people screaming.

Q: This words keyword is “forever” – what is this in regards to?

What was your last scene for the films? and favorite fan encounter?

It was hilarious because we spent the entire series filming the most miserable conditions, then we end filming in St. Thomas. We did the last shot as the sun was coming up – it was amazing. It was a nice way to end it. We were considering shooting it in the sea in Vancouver which would have not worked at all (laughter)

Q: Were you sad to let Edward go?

Yeah, it’s very strange. The entire way through – up to the last shot – it’s a strange part because on one hand you have to have a lot of the audience project their idea of Edward. It doesn’t matter what I do sometimes, the fans want him a certain way. Then there are my instincts to find the fallibility and weaknesses in him. So you’re trying to play both these things at the same time. You’re trying to play someone who’s seen as playing this perfect thing.

It was great to have multiple films to get used to and get into the character. It’s good to have multiple chances. It’s bad on the other hand because your ideas dry up sometimes and you get lazy sometimes because you’re around the same people. That was the good thing about having different directors, so you could stay on your toes.

Q: This has obviously opened a lot of doors for you. How do you see it impacting your career ten, fifteen years down the road?

I don’t know – people ask if I’m afraid of getting typecast, but you can’t be afraid of it. It’s not up to you. I’m getting parts where I don’t play a vampire. I don’t know if people will accept me in them, but there’s really nothing to be afraid of it. But yeah, I have no idea in fifteen years – I don’t know how people will remember this series at all. It’s crazy how intense people are about this series. So I’m not sure how that will last, if there will be that tenacity in fifteen years.

Q: Was there any moment during filming that you’d like to relive and why?

The whole first movie was pretty fun. There was a good energy, people were fighting for it because they believed in it (the first film). So it felt like a big deal. It was really exciting, the first one. And the whole year afterwards.

Q: This franchise has given you a lot of success. Are you hoping to maintain that level of success as you go forward?
Well, I don’t know. If I could get any semblance, any more control, of m public image – that would be nice. No, it’s impossible to maintain this level of success apart from Denzel Washington (laughter). It’s a strange place where the film industry is at, where you could just play super hero after super hero. That seems to be the only guaranteed big money thing.
Q: At the end of the day, are you glad it’s over?
In some ways. As soon as someone refers to these movies as a franchise – a franchise is a Burger King, a Subway – the big guys love it when something like this becomes a franchise. As an actor, it’s scary. You really feel like you have no control. It’s a huge machine and it becomes part of the cultural landscape. It’s scary because you get trapped and you get scared of changing. And that’s the worst thing that can happen.
Q: Are you more famous in the UK than you are here? and if so, how?
I don’t know actually. I used to be able to be in England out in public and be fine – it came out in the U.S. first. I get a lot more abuse in England. That’s kind of just the general English attitude. It’s just your instinct (laughter)
Q: You looked like a natural stepping into the father role?
I quite like working with kids and animals, which everyone says you shouldn’t do. Because it makes you feel like you’re not acting – someone who’s just providing stuff to react to. Especially working with a baby. It’s great. I would say, but a dog or a baby in every scene – everything’s gonna be better. And if they’re not, just shoot the dog (laughter). They’ve got some good baby actors.
Q: and by shoot the dog, you mean…
Rob: Either way! (laughter)
Q: Do you watch any vampire films/shows?
Rob: I really like Blade. My favorite character in the new ones.. I like.. I Benjamin (the actor in BD 2). It was nice having actors who came in and were really enthusiastic. They were so excited about even five lines. I haven’t seen that many vampire films/shows. I’m not a non fan, but it’s an unusual thing to be a fan of. It’s like, “I love zombie movies. I love zombies. I just love them.” It’s more of a psychological problem. (laughter)
Q: Do you remember back i 2008 the first time you met Kristen and Taylor? I don’t mean to throw Taylor under the bus but he says he can’t remember meeting you.
Gee I don’t remember meeting him either. I met him when he was wearing his wig and stuff. I met Kristen at the Twilightaudition. My impressions of them… I’m still just trying to come with terms of acknowledging being an actor at all. When I did Harry Potter, I remember looking at Dan, Rupert, and Emma and being like “Wow, those guys are actors” I was starstruck and I wanted to be one too. I was starstruck by Kristen too when we first met. With Dan, Rupert, and Emma, I still see them as massively famous people. It’s strange to have gone through the same experience with Taylor and Kristen as well. It’s massive.

Q: Bella’s a tiger let out of a cage in this one. What was that like as an actres, especially doing it at the same time as BD 1 – so in one shoot you were caged, the next you weren’t.

The visualization of the vampire’s powers… how did you bring those to the screen?

Bill: Bella’s shield, something no one can seen, you had to bring that to the screen. It can’t just all be something that gets adjusted. Taking Bella’s power, I wanted to make it as subtle as possible. If you watch it, the first time it comes off her you see a bit of her shape. It feels like something that’s part of her. I didn’t want to do a Wizard of Oz bubble.. they all presented challenges.

Alex’s power was the darkest power. Throughout, we tried to side with subtly.

You haven’t directed all the films but you’ve seen all the films. Can you talk about the arc Bella goes through, and the performances you got from the characters – Bella more than any other goes through the most changes.

I worship at the alter of Kristen Stewart. Her arc was pretty – it wasn’t that big arc across the first three movies. In Part 1 she fell in love with a guy she’s going to marry. We made Part 1 and Part 2 as one movie. And it speaks to the achievement of Kristen Stewart.

It’s an amazing arc that she has across this, and it’s important to remember we shot it all at the same time. She’d go from filming as a badass warrior in the morning, and then emaciated in the afternoon (to film pregnancy)

She has this extraordinary energy. She’s really so focused when she’s in something. I was really worried when we looked at the schedule. It was this added challenge she got excited by. I think she was dying to play the vampire.

What does a TwiHard get out of the entire book and movie series?

In some ways I’ve had a peculiar position with the films. I’ve come in and out of them, I’m not like Rob and Kristen. I’ve kind of came in and out, so I can still have a sense of what’s inside and what’s outside. Also, the younger fans don’t recognize me because I look different than my character. Until some parent goes… “see that guy over there? He’s in Twilight.” Then their kids attack.

When you come to the last chapter of the series, Bill has done a respectable job of serving the fans. especially for the people who feel like they’ve been with Bella, gone through with her journey. Bill has been very sensitive to that. I think Bella’s journey is one of.. a lot of people can relate to it even though it’s in the world of vampires. Bella’s journey is one that people can vicariously go through it.

Talk about the parenting by Rob and Kristen

Kristen was a great parent. She would go to Bill and tell him how she should be parenting Mackenzie (renesmee)

Rob was the easy going dad, him and Mackenzie were always having a laugh about something. It was all very natural, all very sweet. Everyone wanted to hang out and bond with her. I think she made it easy to love her.

What he remembers about meeting Kristen and Rob, and if they will continue to be close:

I remember meeting Kristen for sure – it’s so weird I don’t even remember meeting Rob. It’s so strange (laughter) Kristen – I didn’t have scenes with Rob in the first one. But Kristen, I showed up mid way through filming and only was needed for two or three scenes. I was barging into this new environment so I was newest and youngest. It was awkward when we first met each other. We were filming a scene on the beach, there was wind, I was wearing a nasty wig. It was very uncomfortable. But ever since then it’s been great.

That’s the bigegst thing I’ve seen from this. We’re so close right now, they’re some of my best friends. That won’t go away at all. It will be more difficult because we don’t have the excuse of months and months on set. Our friendships will go on forever, and I find it so amazing that the cast got along so well. We’re so thankful for that. We have a blast every time we film these movies, every time we promote them, it’s a miracle.