He talks future projects in this one!! Great interview. 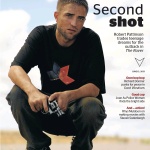 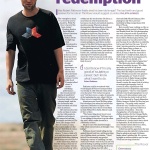 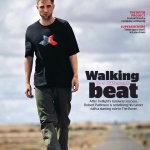 The vampire is dead. Or at least by now he should be. With The Rover, the new film from Animal Kingdom director David Michod, Robert Pattinson has finally shaken off the Twilight tag that threatened to define him forever as an actor.

In The Rover, he has an accent from America’s deep south, bad teeth and a strange emotional dependency on others. It’s a role that has attracted some very positive reviews: Variety critic Scott Foundas talked about ‘‘a career-redefining performance … that reveals untold depths of sensitivity and feeling’’.

Pattinson is a relaxed interview subject. He has a hearty laugh, and the air of someone who hasn’t worked out all his lines in advance, but he’s also ready to explain and explore what interests him. He’s serious about his work, and keen to make movies with people he admires and respects.

He’s aware that he’s getting favourable reviews for The Rover. He’s happy about this, of course, he says, ‘‘because I really love the movie’’. But when it comes to his performance, he admits, ‘‘I always think of it as a work in progress, and it just gets frustrating, thinking about things you could fix.’’

At the same time, when he read the script, it was one of those rare occasions when he connected immediately with a role.‘‘Maybe because it was so loose – you could really do almost anything with the character. You could project anything onto it. But I don’t know, I could hear the voice in my head almost immediately, I could feel a walk … and that’s only happened to me three or four times since I’ve started acting.’’

Michod plunges the audience swiftly into the world of the film, a near-future in which Australia has become a run-down, devastated, hand-to-mouth economy. There’s an almost documentary-like immediacy, as there’s virtually no explanation of how this collapse has happened. Early on, Pattinson’s character, Rey, is taken in hand by Pearce’s character, for reasons that gradually become clear. Yet there are many things about Rey that don’t get spelled out or remain ambiguous: this is another aspect of the film Pattinson appreciates.

He spent almost no time with Pearce before shooting started. ‘‘I guess because I’d auditioned a year before, and talked to David a lot. I already basically made my mind up how I wanted to play the character. I had to keep my mouth shut, figuring out what he wanted to do, it was kind of scary.’’ He wondered what would happen if Pearce’s interpretation was totally at odds with his vision of his own character. ‘‘It’s worked out great now,’’ but there were a couple of moments at the beginning, he says, when it felt as if they were in completely different films.

American actor Scoot McNairy plays Rey’s brother, from whom he has become separated. Pattinson’s a big fan of the chameleon-like actor whose recent films include Killing Them Softly, Monsters and 12 Years a Slave. ‘‘The funny thing about Scoot is you can never recognise him,’’ Pattinson says. “I was talking to him about Argo the other day, and I didn’t realise he was in it. Absolutely no idea.’’ He gives one of his heartiest laughs. ‘‘Our whole conversation, he thought I was joking.’’

He doesn’t mind telling stories against himself, and has a self-deprecating way of talking about certainties. ‘‘I don’t know if I’m necessarily any good at ‘sculpting a career’ or anything,’’ he says, ‘‘but I know what I want to do. I’m not very good at finding or getting massive movies.’’ It turns out that he’s talking about life after Twilight. What he means, he says, is that ‘‘I don’t get approached very much about superheroes and stuff.’’

He has, however, plenty of interesting projects under way or awaiting release. The Rover premiered at Cannes, and so did Maps to the Stars, a dark comedy about Hollywood directed by David Cronenberg. He’s also made Queen of the Desert, a biopic with Werner Herzog, about British traveller, writer and political figure Gertrude Bell (Nicole Kidman). He’s playing her ally T.E. Lawrence – inevitably inviting comparisons with Peter O’Toole.

He’s recently been working on Life, an intriguing double portrait of James Dean and Dennis Stock, the Life photographer who took a famous series of portraits of the actor just before he broke through as a star in East of Eden. Pattinson plays Stock, and people assume he was attracted to the part because it is a reflection on celebrity, but he says that’s not the case. ‘‘A lot of what I was interested in was nothing to do with James Dean, or fame, or anything like that.’’ What drew him to Stock, he says, is that the character is depicted as ‘‘a really bad dad. And you don’t really see that in young guy parts. He just doesn’t love his kid, or is incapable of it, and it kind of pains him.’’

The film is also about conflicting visions of creativity, he says. ‘‘It’s a little ego battle, and a lot of it is about professional jealousy, and who’s a better artist, who’s the subject and who’s the artist.’’ Life is directed by Anton Corbijn (Control) who was a photographer before he turned to movie making.

Pattinson says his own opinions on photography are ‘‘kind of weird’’. He’s not a fan of digital image-making, he says: he feels it’s too easy, that it doesn’t require the same level of artistry as analogue photography. And, of course, he adds, experiences with paparazzi haven’t helped him appreciate photographers. ‘‘I have a very negative attitude towards photographers in a lot of ways, so it’s interesting to play one.’’

In October, he starts work on Idol’s Eye, to be directed by French filmmaker Olivier Assayas, making his Hollywood debut. Robert De Niro has just signed on. ‘‘I’m really, really excited about this one,’’ Pattinson says. It’s a true story about a group of thieves at moments of transition – from the changing face of technology in burglar alarms to the shifting realities for the Chicago Mafia.

He’s also starring in an independent post-World War I drama called The Childhood of a Leader due to shoot in September. It will be directed by actor Brady Corbet (Mysterious Skin, Funny Games), from a script he has co-written. ‘‘I’ve known Brady for 10 years, he’s great and the script is phenomenal.’’

Corbet has said he really appreciates the way Pattinson uses his celebrity to help ensure that films he admires get made. Pattinson laughs when I mention this. It’s a power he might as well use while he can, he suggests. ‘‘We’ll see how long it lasts.’’

The Rover is currently screening.