New BTS Still and Interview with Cronenberg who mentions Rob

‘Maps to the Stars’ is on the cover of the French Cahiers Du Cinéma Magazine, featuring a long and spoiler-filled interview with David Cronenberg where he mentions Rob a few times and there’s a new behind the scenes still with Rob and Mia. 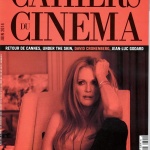 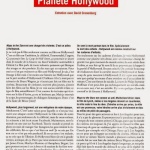 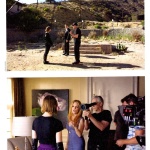 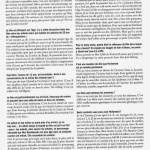 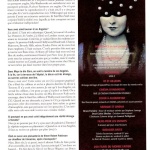 Translation of the Rob Mentions

A child kills another near a urinal, it goes a long way … At the same time, the beauty of the movie is that it’s ‘for’ children, to save the children. The character played by Mia Wasikowska is older but behaves like a child. She gathers children.
Yes the main character is the sweetest, most naive, the purest even she’s crazy. She isn’t here to become a star but to solve a family trauma. Jerome’s character played by Robert Pattinson is also a child. He isn’t born in Los Angeles, he comes from Indiana and elsewhere, he believes that he is able to play the game. It’s pathetic, he’ll be destroyed like a child. He’s too vulnerable. He plays the badass people but he doesn’t. At the end, the children are destroyed by monsters. This is the new direction taken by the poem Liberté which was written by Paul Eluard at the time of the Resistance. Here, freedom is death.

Why did you have so much difficulties to make Maps To The Stars ?
My movies are canadian-UK, Canadian-French or Canadian-German coproductions. I had to shoot at least five days in Los Angeles. We couldn’t recreate Hollywood in Toronto, we had to shoot there, it’s so special. We shot twenty four days in Toronto and five in L.A. One of the problems was to find a coproduction allowing to shoot in the States, and therefore spending money in the United States rather than in the coproducing country. And in most coproductions, it’s not possible to have a co writer which isn’t from the coproduction country … There is also the problem of the actors : we were only allowed to have one American actor, and that’s John Cusack. Julianne Moore has a British passport, Mia Wasikowska is Australian with a Polish passport, Robert Pattinson is English. We didn’t manage to find a coproduction eight years ago or five years ago either. And this is the coproduction with Germany which allowed us to get an American screenwriter. And Saïd Ben Saïd joined us. Here is the reality with which I have to deal as an independent director !

In Maps To The Stars, we can feel the light of Los Angeles. At the end, on the terrace of the hospital, the decor is very strange, we can feel the hills behind.
You believed it? This scene is a CGI one! We shot the hills and we put behind the scenes in Toronto. There was nothing around. I know that in Los Angeles, we would see the hills, that’s why I put this background. We did the same the thing in the scene where Mia discovers Rob on set, the Hollywood hills in the background are made in CGI. When people ask me if I like CGI, I say yes: not to create monsters, but to give birth to this kind of atmosphere without anyone noticing it. It’s invisible but it helps to create a certain reality.

Was it a joke to shoot Robert Pattinson as a limo driver after Cosmopolis?
No. Of course, I thought about it, but he loved the idea of being a part of an ensemble, not being the lead actor. So this is a chance … In fact, in the movie, he’s Bruce Wagner, because Bruce was a limo driver for years, and the lead part in his first novel, Force Majeure, is a limo driver. But only a few people saw Cosmopolis, so nobody will think about it. I hope there will be more people going to see Maps To The Stars (laughs)!

Source: scans: therpattzrobertpattinson | translation: mapstothestarsfrance
Via: RPLife (you can read the full interview translation there)